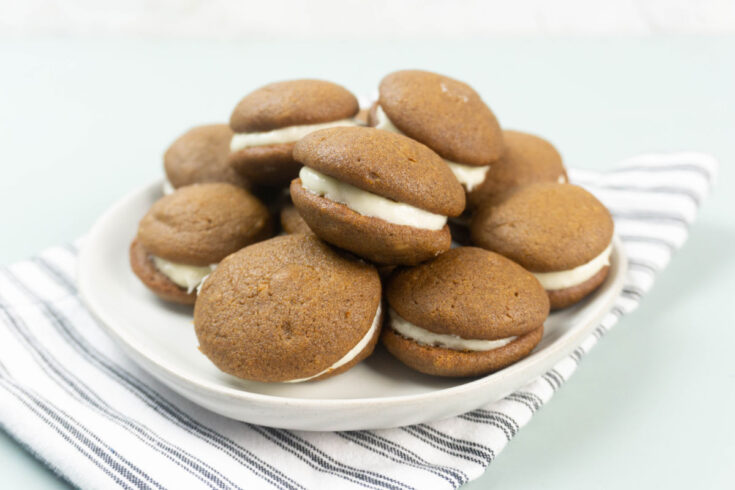 My dad’s favorite dessert are whoopie pies. For Christmas last year I made him Red Velvet Whoopie Pies. They were totally a hit.

This year I wanted to make him some for Thanksgiving. What better flavor than pumpkin whoopie pies?! I’m so excited for my dad to try these. 🙂

This post contains affiliate links at no extra cost to you. Please read my disclosure here.

How to Make Pumpkin Whoopie Pies

In a bowl of a stand mixer with the paddle attachment, whisk together flour, baking soda, baking powder, salt, and spices.

Add in the oil and brown sugar on medium speed until well combined. 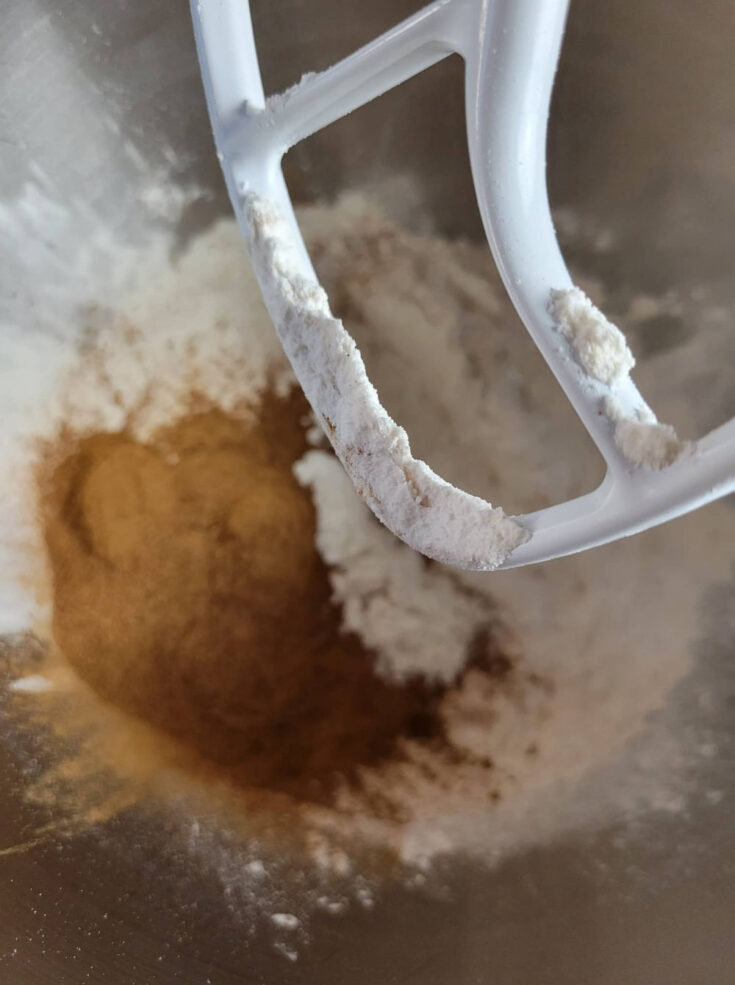 Add the pumpkin and vanilla and mix on medium-low until well incorporated. 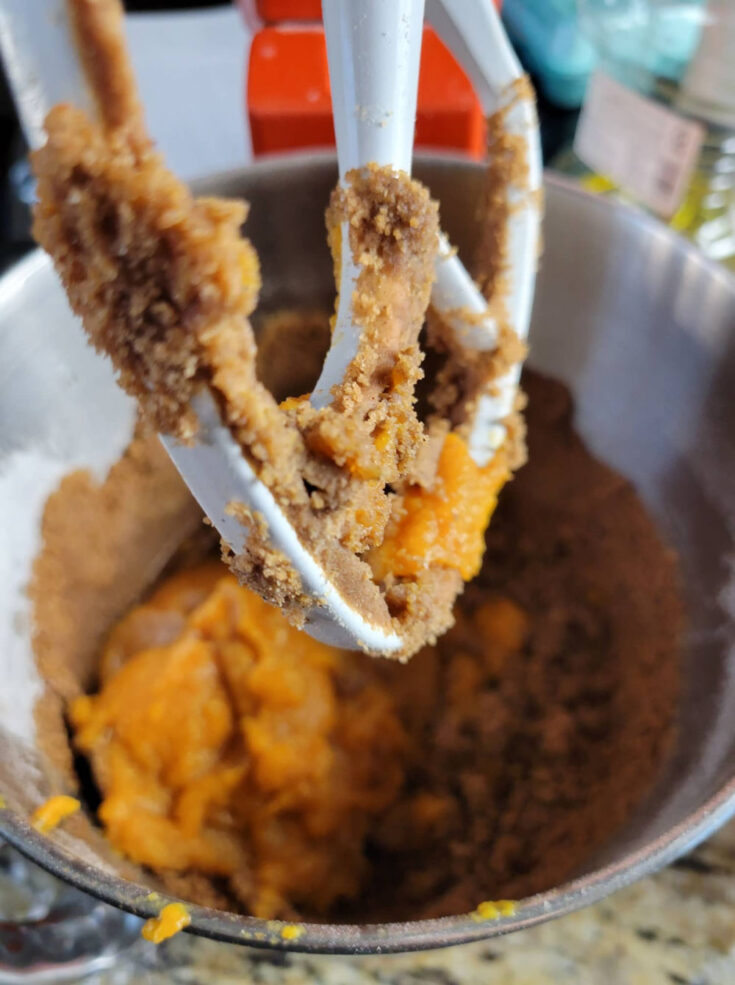 Add eggs, one at a time, mixing on medium-low, and be careful not to over mix.

Leave a little room between cookies as the batter does spread a little. 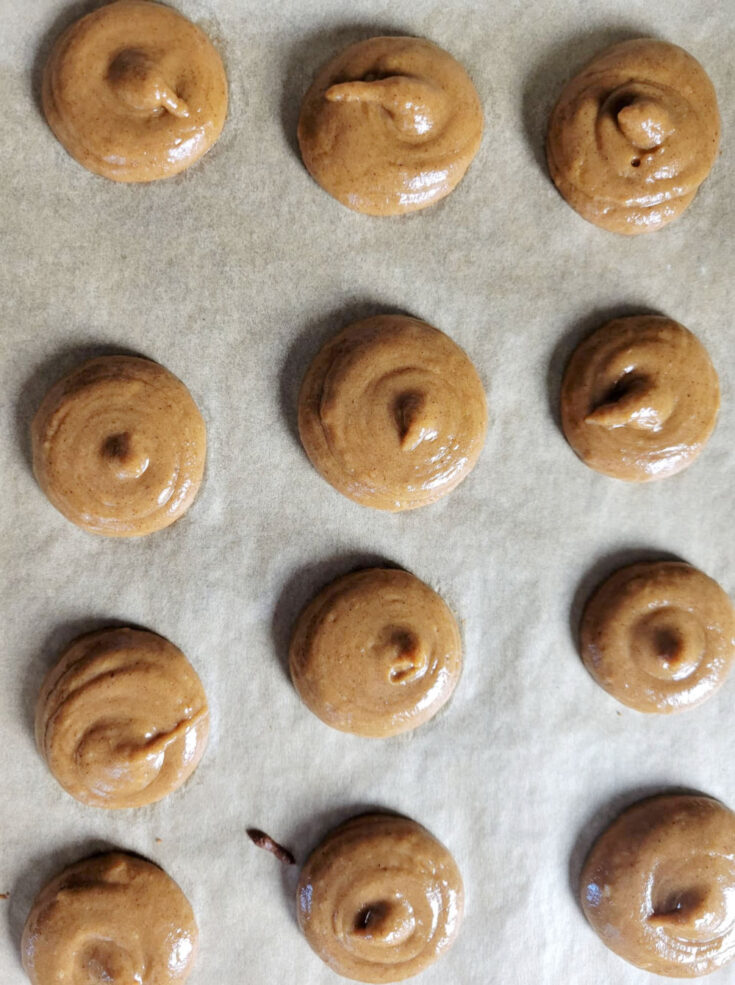 Bake the whoopie pies for 10 minutes. Once fully baked, the pies should spring back when touched and a toothpick inserted in the center should come out clean.

Remove the pan from the oven and place it on a cooling rack for 10 minutes. 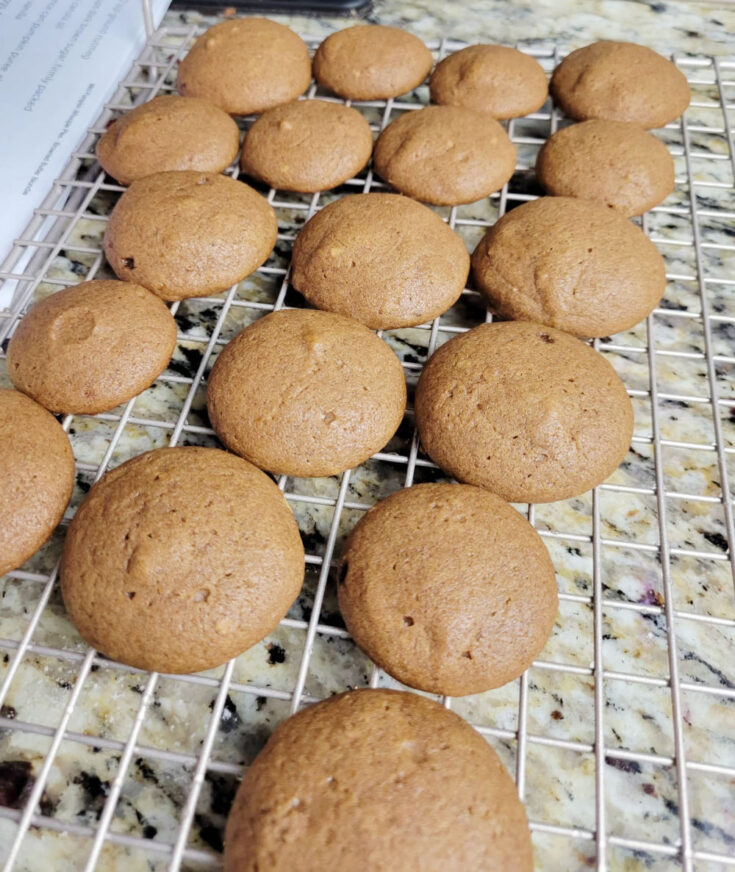 Carefully remove the whoopie pies from the pan and transfer them to a wire rack to cool completely before filling.

Gently press together to create a sandwich. 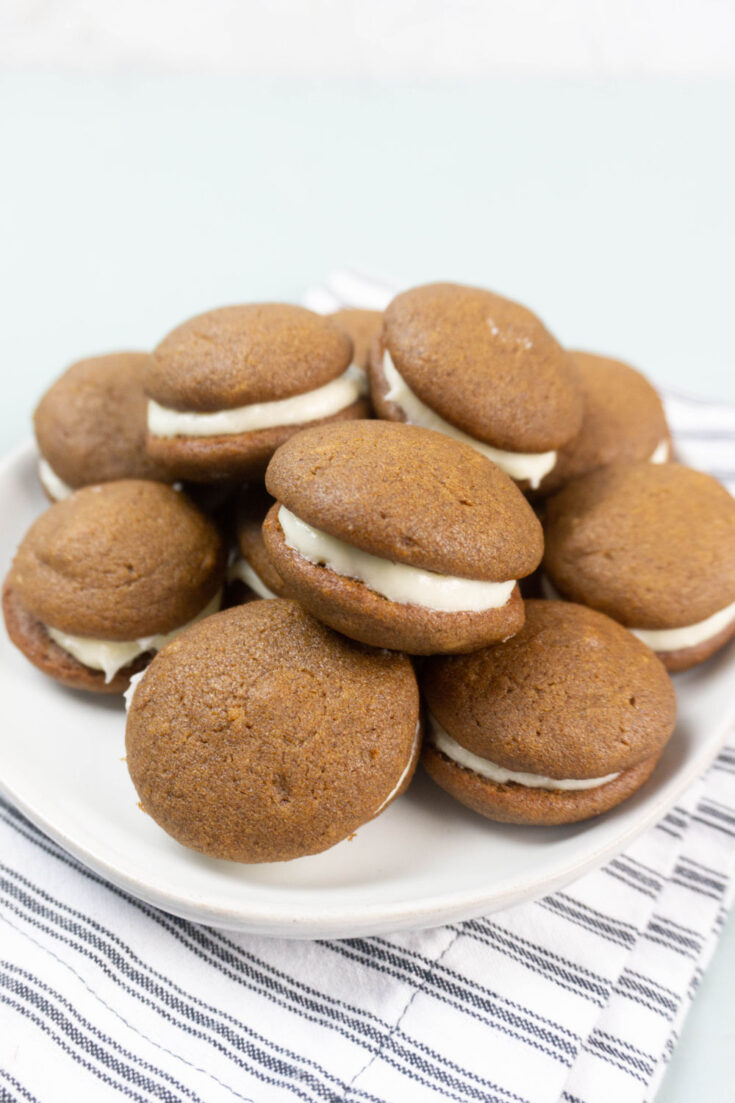 Place the assembled whoopie pies in the refrigerator for 30 minutes to an hour to chill, allowing the frosting to set.

Place the softened butter and cream cheese in the bowl of a stand mixer fitted with the whisk attachment.

Mix on medium-high speed for 2 minutes. Add the confectioner’s sugar, 1/2 cup at a time, mixing at low speed until incorporated.

Once all the sugar has been added, increase the speed to medium-high and mix for two minutes until smooth.

Scrape down the sides of the bowl as needed. Add the maple syrup and vanilla. Mix on medium-high speed until incorporated.

Place frosting in a large piping bag fitted with a large round tip. If frosting becomes too soft and warm, place it in the refrigerator for 10-15 minutes and then resume filling the whoopie pies. 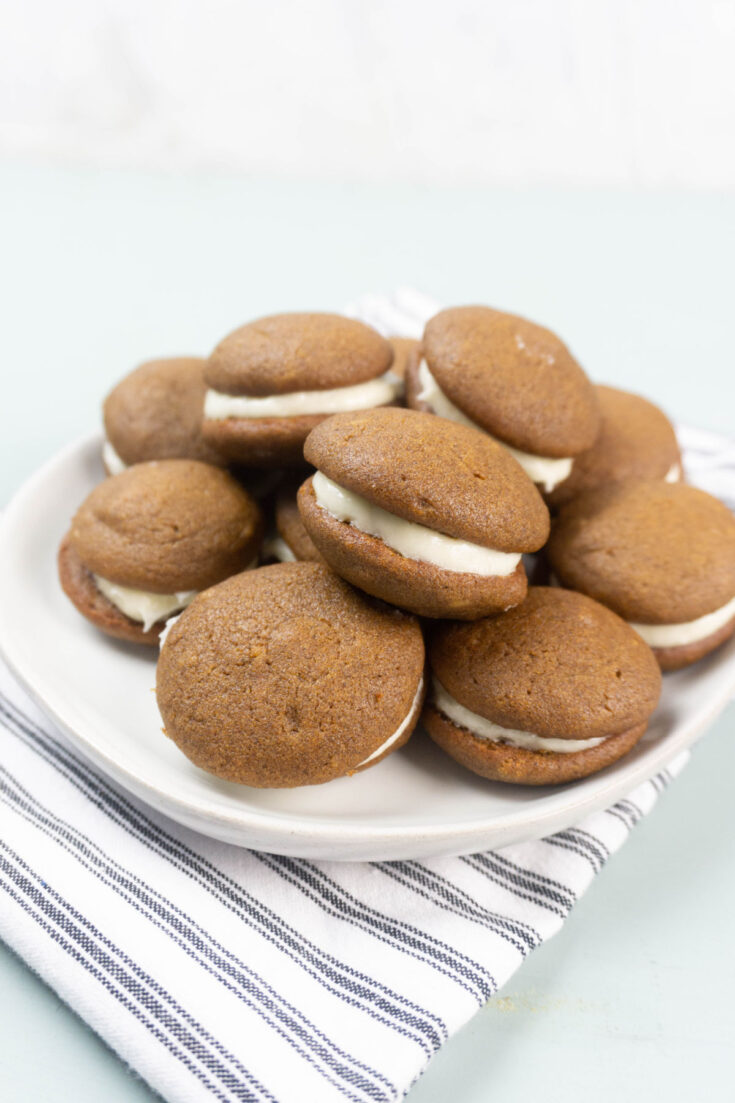 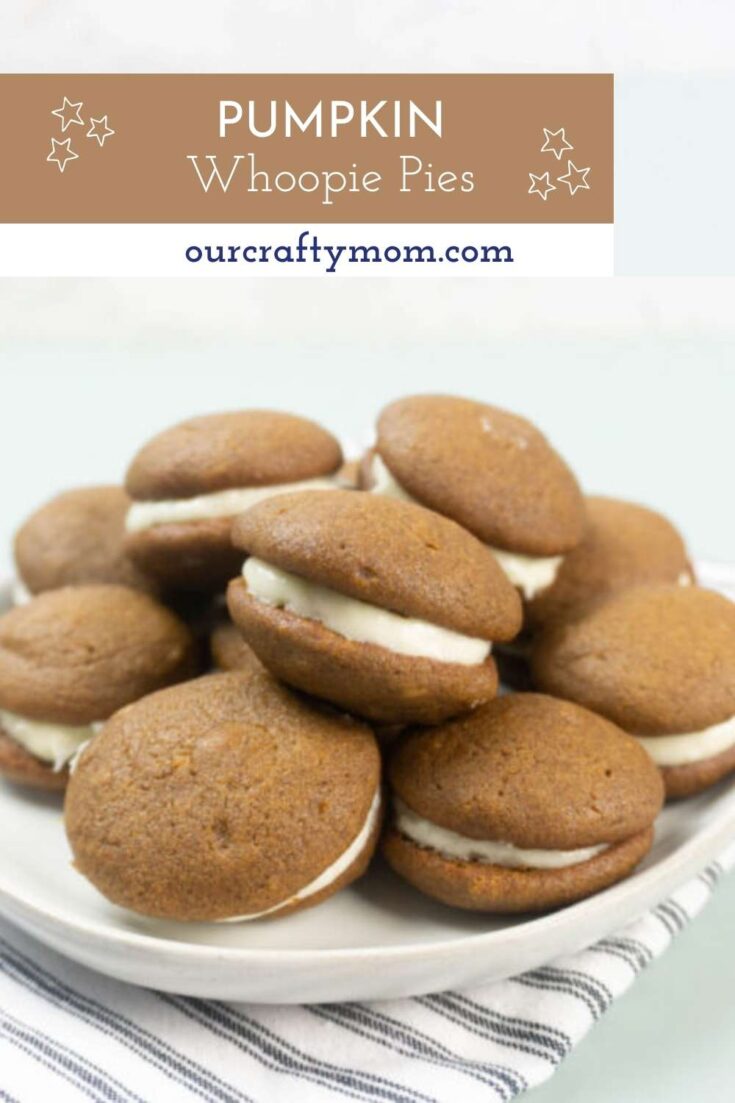 How To Store Pumpkin Whoopie Pies

These pumpkin whoopie pies should be stored in an airtight container in the refrigerator. They will stay good for 3 to 4 days.

The filling on these whoopie pies is made with cream cheese, so they need to be refrigerated. If you are placing them out for a party, don’t let them sit for more than 2 hours.

You can also wrap them individually in plastic wrap to keep them from sticking to each other. The cake may stick to the plastic, but it will be easy to open…and to eat!

How Long Will Whoopie Pies Last In the Fridge?

Whoopie pies will last 3 to 4 days stored in an airtight container.

Can I Freeze Whoopie Pies?

Yes! You can freeze the baked whoopie pies for up to 3 months. Wrap them individually in plastic wrap them stick them in a freezer-safe bag.

How To Defrost Whoopie Pies?

It’s best not to reheat the whoopie pies in the microwave because of the filling. The easiest way to defrost them is to thaw the cookie sandwiches overnight in the fridge.

How Do You Keep Whoopie Pies From Sticking?

Whoopie pies have a high moisture content making them sticky if they sit out. They should be refrigerated within 2 hours.
If you wrap them individually it will help keep them from sticking together. It also makes them easier to eat without getting sticky fingers!

Some say Amish wives invented the whoopie pie from remnants of cake batter and frosting. According to the story, the name originated from the Amish men who, when they found these treats in their lunch boxes, would exclaim, “Whoopie!”

Why Did My Whoopie Pies Go Flat?

Whoopie pies can come out flat for a few reasons. The main one is overmixing the cake batter. When you fold the dry ingredients into the wet, make sure to not over mix.
Just mix in the flour and spices until they disappear into the mix.

Don’t forget to come back and let me know how your pumpkin whoopie pies turned out!

Before you go, I’d love for you to subscribe to my email. It’s a great way to stay current on all the fun crafts, easy recipes, and home decorating ideas.

You can find me on social media below:

These look so good, Michelle! I can't wait to make them.

Hello and welcome to Our Crafty Mom!

My name is Michelle. I'm a crafter, DIY'er and lover of all things home, including easy recipes. So happy you are here!